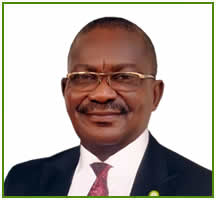 Prof Umoh had his Secondary education at Federal Government College Ikot Ekpene (FGC Ik) from 1978 -1983. He then proceeded to the College of Medicine of the University of Lagos for his medical education from 1984 – 1990 where he obtained the MBBS degree. He completed his mandatory one-year Housemanship at the Lagos University Teaching Hospital and the National Youth Service Corps (NYSC) at General Hospital, Anka in the Sokoto (now Zamfara) state of Nigeria.

In 2001 he obtained a postgraduate diploma in reproductive health from the Liverpool School of Tropical Medicine (LSTM), United Kingdom and in 2002 he was conferred with the Fellowship of the West African College of Surgeons in the Faculty of Obstetrics and Gynaecology. He also holds the Fellowship of the International College of Surgeons and a certificate in Economic Evaluation in Global Health from the University of Washington.

Prof Augustine Umoh has attended several Courses and seminars both in academics and in management. He became a Jerusalem Pilgrim in 2010 Prof Augustine Vincent Umoh worked as a Resident Doctor at the Lagos University Teaching Hospital (LUTH) before his appointment as a Lecturer and Honorary Consultant in Obstetrics and Gynaecology at the University of Uyo and the University of Uyo Teaching Hospital (UUTH) respectively following his conferment with the Fellowship of the West African College of Surgeons.

He has served as external examiner to many universities and has been a postgraduate examiner for the West African college of Surgeons in the Faculty of Obstetrics and Gynaecology from 2011 to date. Prof Augustine Umoh is an active member of the Society of Gynaecology and Obstetrics (SOGON) at both the Sector and National levels. He served as the Secretary of SOGON, Eastern Sector and member of SOGON Council, National, from 2009 to 2015. He was also at various times the President of FGC IK Old Boys Association both in Lagos and in Akwa Ibom State

Prof Augustine Vincent Umoh pioneered the official Medical publication of the Akwa Ibom State NMA, the Ibom Medical Journal in 2006 and subsequently served as its pioneer Editor for eight years. He has been a member of the Akwa Ibom NMA State Executive Council from 2006 to date and in 2014 was elected the Chairman of NMA Akwa Ibom State. In 2017 he was appointed the Editor of the Nigerian Medical Journal, flagship journal of the Nigerian Medical Association. He is currently a member of the National Officers Committee and National Executive Council of the NMA. Prof Umoh has published widely both in Local and International Journals and is a reviewer to many journals.

Prof Augustine Vincent Umoh is a man of his people. In 2013 he was honoured with the tradition Obong title of Utuenikang Ibianang in recognition of his services to the community. He enjoys singing, traveling, watching football and teaching. He believes, fervently, that what is worth doing at all is worth doing well and has endeavoured to apply this maxim in that he does. Prof Augustine Umoh is married to the delectable Dr Rosemary Augustine Umoh and they are blessed with Children.